After a difficult year for our R2DAX robot trader, we have stopped it on 14/10/2021 in order to analyze the situation (its market, its behavior, etc...).

We relaunch the robot from 19/11/2021 with an evolution of its money management which will be explained below.

For the restart, you don't have to do anything special, the robot continued to work until then, the signals were filtered as it can be the case when the volatility is extreme, but the automatisms were still functional. The restart is therefore a simple lifting of the temporary filtering of the signals.

If you had stopped or uninstalled the R2DAX robot, just put it back.

- Performance of the typical portfolio 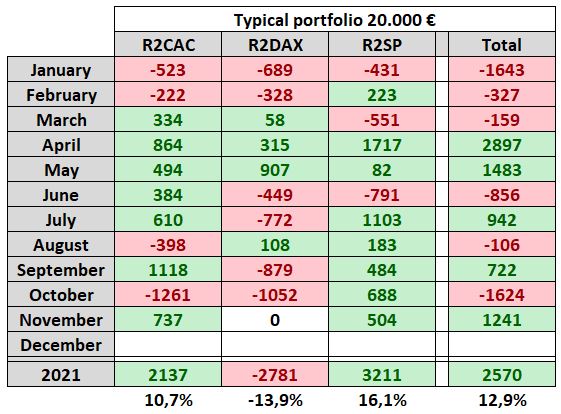 The performance on November 15 for the two segments CAC40 and SP500 is very good, with 26.8% of the portfolio between them. We have a target of 25-35% for the whole portfolio. We can therefore see that it is the R2DAX robot with the loss of 13.9% of the portfolio value that brings down our annual performance to 12.9%. The objectives are largely achieved on the other 2.

This underperformance of the R2DAX robot while the other two continue to perform very well and the fact that it has reached its maximum drawdown (risk) has led us to put it on pause for study.

Evolution of the cumulative performance of R2DAX in red compared to the DAX30 index in blue (protective stop trigger: orange dot).

Overall, we see a DAX30 that has had very little trend phase, the market was very flat from January 1 to March 5, then without much movement since April 16.

This lack of trend explains in large part the underperformance of our robot trader, which is a trend-following system, which therefore needs movements (bullish or bearish) to generate performance.

We calculate the cumulative performance of the robot without money management (so assuming that all trades have the same weight, there is no evolution of the number of contracts at each trade). This analysis allows to see the quality of the signals. An increasing curve indicates signals that generate performance, on the contrary a decreasing curve indicates signals that generate losses.

There is only one area (in green) showing good quality signals, which corresponds well to the evolution of the DAX30, which has given only one real trend period in the year.

No change on the generation of signals, the quality and consistency with the evolution of the DAX30 is in line with our expectations, it is quite normal to have poor signal qualities in phases of "flat" market (in range), the money management must compensate to limit losses and maximize gains when a trend is established.

The system integrated in our robots allows us to vary the size of the positions at each decision making in order to progressively increase the leverage in the range phases (flat market) to have the highest possible leverage at the exit. The exit of a range should trigger a trend and gains.

This system is globally based on 2 parameters:

* the speed of the leverage evolution

* the "size" of the protective stop

The following study shows the result of an optimization backtest giving the drawdown of the strategy over 2021 (vertical axis Z) according to these 2 parameters: 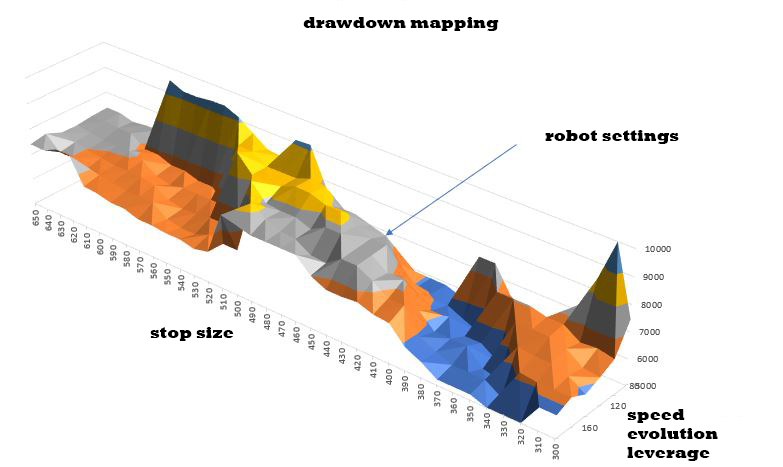 The interest of this mapping is to determine the best pairs of parameters while eliminating over-optimized zones. To do this, we need to identify the weakest drawdown zones and select zones that are not unique "troughs" but "plateau". A single trough always represents an overoptimized set of parameters (if the market evolves slightly, there is every chance of having a completely different behavior).

We can see that the current setting of the robot is well on a plateau but an intermediate plateau and not one of the 2 low areas (in blue on the right and orange on the left), so the set of parameters were not optimal for 2021.

The same study on the performance according to these 2 parameters leads us to modify the money management to be in optimal performance/drawdown zones.

It is then necessary to check that the parameterization remains good for the whole history of the robot in order not to fall into temporal overoptimization (taking optimal parameters for 2021 but extremely bad for the rest of the history) in order to guarantee a good replicability of results in the future as in the past.

The 2 parameters that mainly define the money management system become variable depending on the value of the DAX30.

The speed of movement of the leverage is slowed down and the protection stop is further away.

This modification mainly allows to absorb longer range zones (flat market) without increasing the losses in value over the period.

The drawdown of the R2DAX robot is reduced.

The average annual gain over the entire history is larger.

In blue the new system, in orange the old one and in grey the difference of the 2 (right scale).

We see a first part until the end of 2014 where the gray curve is bearish, indicating that the new system generates less performance. On the other hand, from the beginning of 2015 to now, the gray curve is bullish, so we have a better system constantly on this part of the history.

The blue curve is smoother with less pronounced dips, which shows a better control of the drawdown to optimize the gains.

Warning: CFDs and CFD trading robots are leveraged products that involve a high level of risk to your capital. It is possible to lose more than your initial investment and account balance. You should only speculate with money you can lose. This type of investment is not suitable for all investors, so make sure you fully understand the risks involved and if necessary seek independent advice before initiating any trades. The trading signals provided by our robots are not advice, you should seek financial investment advice to use our signals or automation. CFD trading strategies are computer codes that allow you to buy and sell derivative financial products. R2D2trading does not provide any advice to clients on how to use the strategies. Clients remain the sole judges of the relevance of the strategies (whose operation is published and explained on the site) and are 100% free to activate or interrupt the implementation of these strategies on their accounts. R2D2trading will not be held responsible for any losses incurred by the client due to technical problems, in particular those related to the internet connection, our servers or the EAs provided.